Measuring The Value Of Intangible Assets | A New Approach

In May 2017, the European Commission’s Directorate-General for Economic and Financial Affairs released a paper that examined recent trends in investment in intangible assets and the contribution of intangibles to economic growth and productivity. Among the researchers’ key findings were the following:

This graph below from the Wall Street Journal reiterates the point from the EU study: in recent years intangible assets investment has grown where tangible investment has fallen off, and investment in intangibles has been affected far less by the financial crisis of 2008. 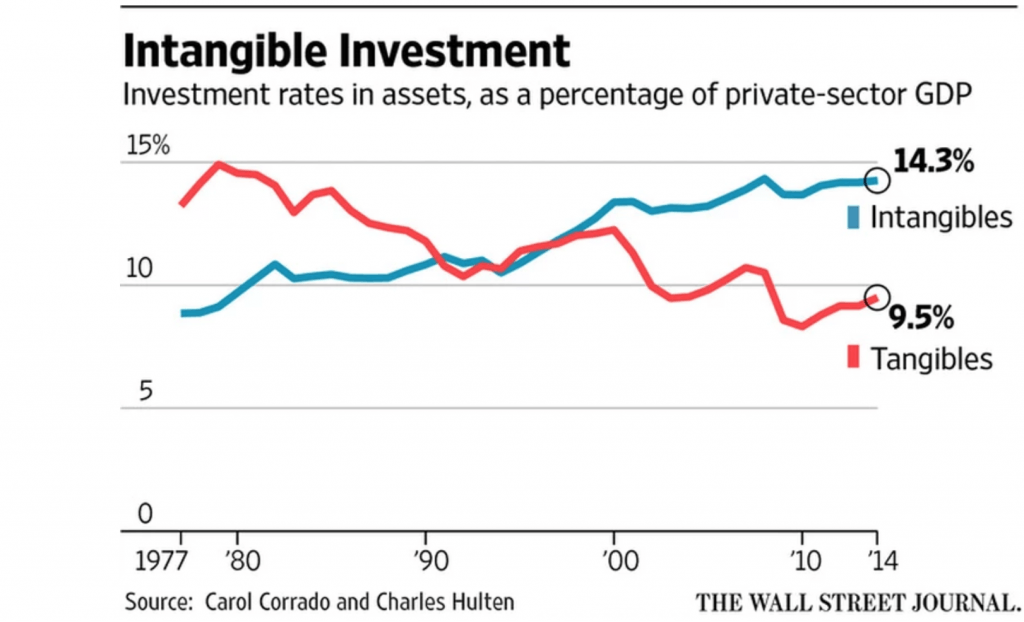 Intangible assets are rapidly becoming huge sources of value for organisations. Writing for the Wall Street Journal, Vipal Monga notes how in its recent bankruptcy case RadioShack valued its intangibles (brand and customer data) and sold them for $26.2 million. Similarly, a huge percentage of Facebook’s worth is connected to its intangibles:

The stock market values the social-networking company [Facebook] at nearly $320 billion. As of Dec. 31, its assets minus liabilities totaled $44.2 billion. The difference between the two could serve as a proxy for the value of Facebook’s vast troves of user data, the algorithms it creates to mine that data and its brand.

But despite the growing body of evidence attesting to the value of intangible assets, there is currently no standard approach for calculating this value. In a recent interview, David Post, a senior analyst at the Sustainable Accounting Standards Board, discussed the complexities of measuring the financial impact of intangible assets on business processes:

For example, employee training looks like a cost in the short-term, but if it leads to process quality improvements, which in turn improves customer satisfaction, you’re eventually going to see the needle move on revenues, market shares and elsewhere.

The problem is clear: although the evidence suggests that intangible assets are hugely valuable to organisations, it is hard to directly measure this value, especially when offset against measurable costs that are tracked in traditional financial reporting.

This means that many organisations remain completely unaware of the value of their intangibles, leading in turn to sub-par business strategies and a failure to invest in assets with huge value potentials.

Smart, digital technologies have already begun to automate many physical and computational processes, allowing organisations to churn out ever-more complex products at fractions of their traditional costs.

Looking ahead, it will not be physical assets but rather the ability to predict trends, distribute knowledge, programme machines and market products to ever-more tech-savvy and attention-lacking consumers, that will give 21st century organisations the edge on their competition. 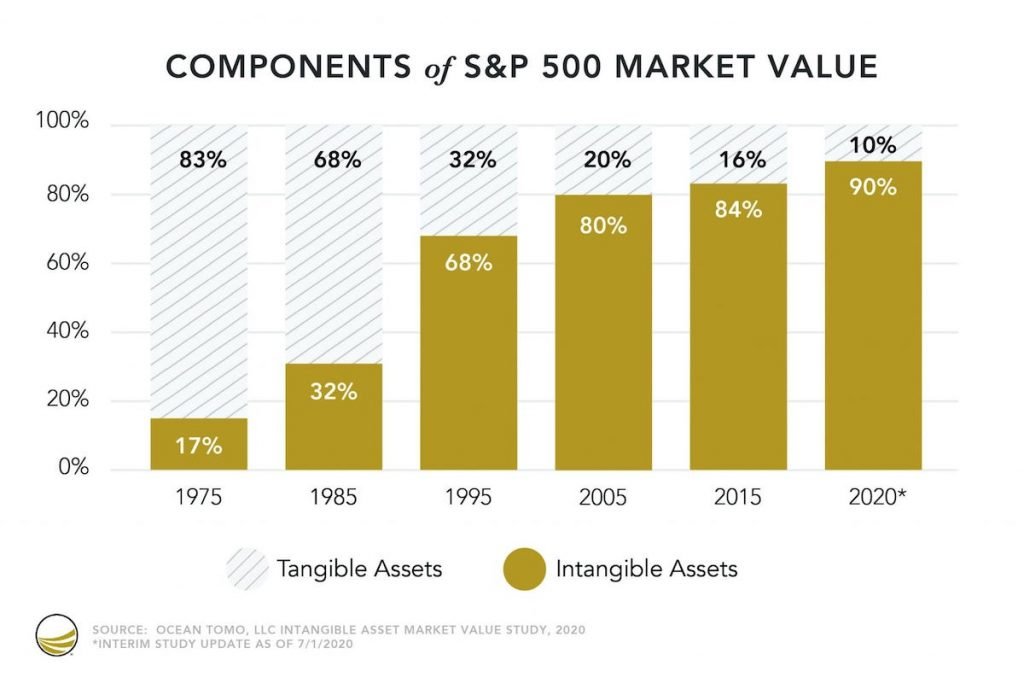 Despite the rise of the intangible economy, much of the business world is failing to value intangible assets. The accounting profession has been grappling with this issue for the past 30 years and has made virtually no visible progress.

Many thought leaders have suggested new approaches to asset valuation, but traditional accounting methods are deeply ingrained and institutionalised. The incentives for sustaining this outdated system have meant that thought leaders are often viewed as heretics rather than helpers.

History books are filled with examples of paradigm shifts. Every shift follows the same basic structure. A dominant model is widely accepted by the majority of people. From time to time unexpected events challenge the assumptions of the dominant model, but are ignored for the sake of preserving the theory.

Individuals appear who question this model and suggest new, better alternatives, but initially their ideas are rejected or laughed down. Gradually, however, people adopt the new models and find better ways to solve the old problems.

As these better ways to solve problems spread, more and more individuals accept the new model. Eventually the new model is accepted, and the majority of people adopt it.

In 1847, Ignaz Semmelweis, a Hungarian physician, noticed a high maternal mortality rate from puerperal fever, following births assisted by doctors and medical students. Births assisted by midwives were much safer.

He realised that the doctors were often attending births immediately after performing autopsies, and theorised that perhaps puerperal fever was a contagious infection transmitted via contact with the doctor’s hands.

Semmelweis made the doctors wash their hands with chlorinated lime water before examining the women. The result was a 16.8% reduction in maternal mortality rates over the period of a year.

Semmelweis’ ideas were rejected by the contemporary medical establishment. Although various physicians over the ages had suggested that diseases might be transmitted by physical contact, this was not treated as medically accurate.

The prevailing theory of disease of the time, miasma theory, held that infection was transmitted by bad air. According to this theory, washing one’s hands before examining a patient could have no effect on the likelihood of that patient’s infection.

Semmelweis’ ideas, which seem so intuitive to us today, were at the time seen as radically unscientific, and heretical.

In 1762, the Austrian Physician Antonius von Plenciz, outlined an early theory of germ based infection. However, like Semmelweis, his theory was not accepted by the scientific community of his day.

It was not till the latter part of the 19th century that the germ theory finally found serious traction in the medical community. The work of Louis Pasteur in the 1860s and Robert Koch in the 1880s provided compelling evidence that disease could be caused by living organisms.

In the 1870s, Joseph Lister pioneered practical applications of the germ theory, developing techniques for reducing infection in medical procedures by using antiseptics and other sanitary techniques. 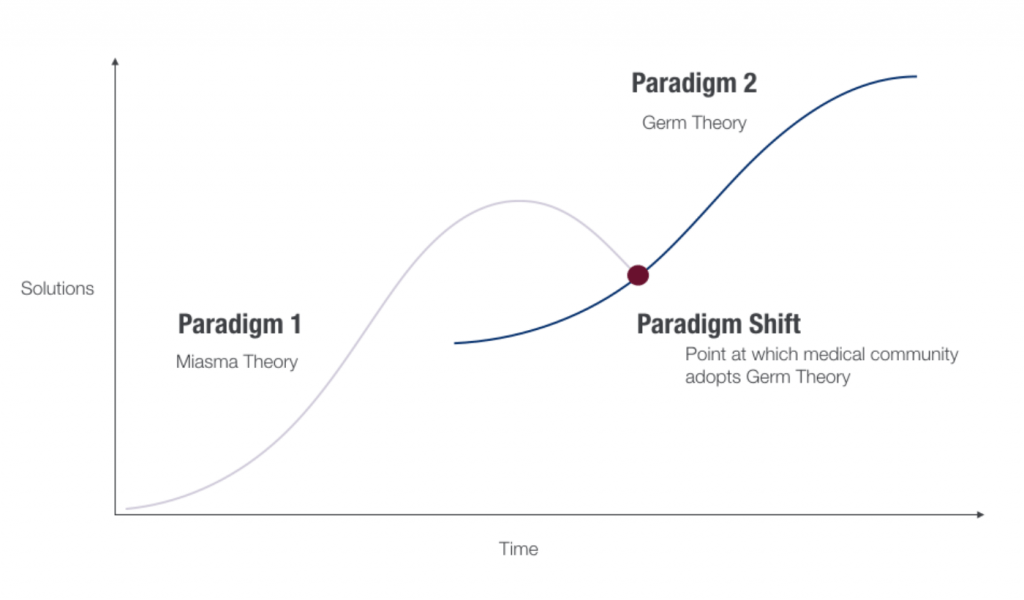 The same pattern is playing out in the business world of today. As we have seen, more and more of the value of 21st century organisations is contained in intangible assets. The rise of this intangible economy requires a new workable model for asset valuation. The old model, which focuses on physical, tangible assets, is becoming less relevant and useful every year.

Accountancy is a toolkit. It should allow organisations to understand, steward, and compare the value of their property, or assets. If, as research suggests, less than 20% of organisation’s value today is found in tangible assets, then accounting that focuses only on tangibles fails entirely at its purpose.

Organisations that do not recognise the significance of this shift, risk being left behind by their competitors. If they cannot value their intangible assets, they will struggle to understand them, to steward them, or to compare how they perform with regards to their competitors.

Organisations that value their intangibles, by contrast, will have taken the first step towards managing them and gaining real rewards from them.

The tools exist to measure intangible value. Thinkers like Baruch Lev and Feng Gu have suggested new techniques to account for intangible assets. Currently their ideas remain on the fringe, sidelined by the traditional accounting institutions.

But they cannot remain there. Intangible value is on the rise. This means that new approaches to intangible assets valuation aren’t just abstract theory; they are practical necessity. 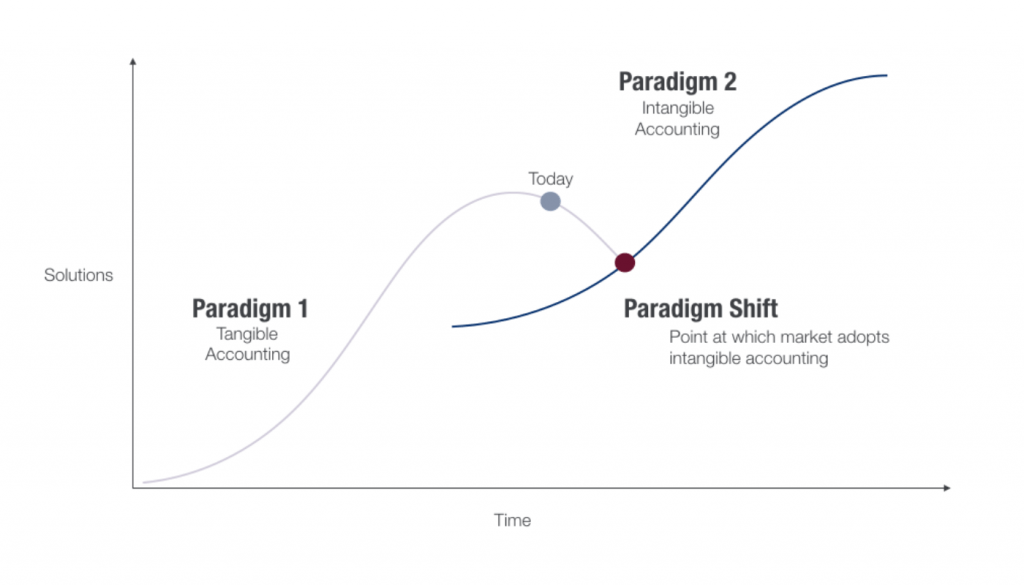 The questions are these:

The 21st century will be about intangible assets. The organisations that understand this will succeed. Understanding intangibles begins with valuing them. At Anmut, this is part of our mission. We pose a simple question:

What if data is the most important intangible not currently on your organisation’s balance sheet?

We help organisations value their data, so they can manage it and treat it like a tangible asset. If you are interested in learning more about data valuation, get in touch.